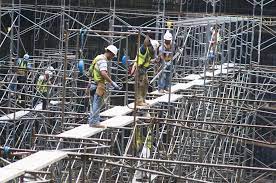 Constructor Magazine warns its readers that The Bureau of Labor and Statistics’ Census of Fatal Occupational Injuries attributes 72 percent of scaffolding injuries to the following four causes:

Per OSHA’s rules and regulations regarding scaffolding design and construction, each scaffold and each of its component parts must be sturdy enough to support their own weight as well as four times their maximum intended load. Each suspension rope must support at least six times its maximum intended load.

OSHA also requires each employer to appoint a competent person to inspect each scaffold and its component parts for visible defects before each shift. Once the scaffold passes this inspection, no one should alter, move or dismantle it without the direct supervision of the competent person.

In addition to the scaffolding itself, the competent person must inspect each worker’s personal protection equipment prior to each shift, including the following:

While OSHA oversees the safety of scaffolds and the personal safety equipment that employers must give each worker, workers themselves must assume responsibility for wearing and using the proper safety equipment at all times. They likewise should develop good safety practices such as keeping their entire bodies underneath the scaffold planking when walking underneath it rather than attempting to observe the progress of supplies moving up or down the scaffold. This is one of the most dangerous scaffolding times since it represents the period during which the likelihood of something falling off the lift and striking workers increases dramatically.